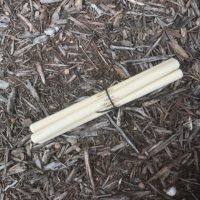 A Drumstick is Just a Drumstick

Modern drumstick design is fairly standard. Most of us recognize a drumstick as a long, thin, hardwood cylinder with a tapered end. Carl Bennett, lifelong drummer and founder of TREE(3), is challenging all of those conventions.

“It was arrived at strictly by necessity for myself on a really organic level,” says Carl. “I was playing fairly regularly with a blues/classic rock band and we were doing full sets—three hours or four hours at a gig.” To combat fatigue, Carl began wearing bicycle gloves or using essential oils and ointments for his forearm muscles. But neither solution was comprehensive or convenient. So Carl decided to revisit an idea he had as a young drummer.

“As a teenager,” says Carl, “I sawed off the broken end of my broken drumsticks [the tapered end]. They were shorter and I was actually playing like Keith Moon. I was able to play crazy fast stuff and I could play a lot longer.”

Enter the TREE(3) drumstick. Each is a simple cylinder with no tapered end. They are slightly shorter than traditional drumsticks and are made out of American Poplar: a lightweight, slightly flexible material riding the line between softwood and hardwood. They are handmade and sold in trinity sets—“a pair and a spare.”

The TREE(3) design not only solves for fatigue, it makes for faster playing and it recovers a forgotten sound. Carl explains that the tapered tip of the modern drumstick is a tradition passed down from military drummers of the Revolutionary War and before. “They would literally take tree branches and whittle them down with their pocketknives,” says Carl. “They found if they had a tip on there it was a sharper sound. But what was lost all these hundreds of years was a really fat, authoritative sound—the old clubs of the Anglo-Saxon days.”

Carl is an original thinker by nature. Perhaps the key is that he is genuinely curious about the world. Like many great designers or inventors he is interested in how things came to be and what we have lost or gained in the process. Preserve the good of the new and recover the good of the past.

“For many years cars were four wheel vehicles and fairly recently people started thinking they could be three wheels,” says Carl. “It’s just one of those things—somebody has to get back to what this is really all about […] a drumstick is just a drumstick.”

For those marching to the beat of their own drum, Carl Bennett is making your drumsticks.