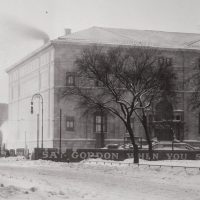 St. Paul is known for its historic buildings, such as the James J. Hill Center. From the houses on Summit Avenue to the Landmark Center, there’s a lot of history here. With such abundant history, comes stories… specifically, ghost stories.

One of the best-known St. Paul hauntings is at the historic Forepaugh’s restaurant. Originally built in the 1870s as a house for Joseph Forepaugh, this fine dining establishment is supposedly home to a ghost named Molly, a maid who hanged herself after an affair she was having with Mr. Forepaugh was discovered.

Our employees who grew up in the neighborhood recall hearing stories about the Chauncey Griggs Mansion on Summit Avenue. Built for Chauncey Griggs in the 1880s, the mansion has been both a private residence—at one point owned by Carl Weschcke, who was a publisher of paranormal books and apparently had an interest in the occult—and an art school. One of historic house’s ghost stories is of a maid who hanged herself in an upstairs art studio. (Wait a second, there seems to be a trend here…)

In 1985, our downtown neighbor, the Fitzgerald Theater, was doing renovations and discovered a balcony no one had previously known was there—and with it, a note written to a stagehand named Ben. Shortly after, tools began moving around on their own, staff began encountering mysterious cold spots, and some could even swear they saw a shadowy figure walking the aisles.

Of course, you can’t talk about haunted St. Paul without mentioning the Wabasha Street Caves, just across the river from the Hill. These caves were a Prohibition-era speakeasy and hangout for 1920s gangsters, and supposedly, some of these mobsters still hang out in the caves today.

The Hill Center has had a few eerie occurrences of its own. One staff person swears they’ve seen the chandelier in the Reading Room—the big one by the front windows—swinging on its own at the end of the night. Considering its weight, a chandelier like that is too heavy to sway in a breeze—if there even was a breeze, which is itself unlikely. Another previous employee would always get vertigo in the exact same spot on a catwalk, but never anywhere else.

More disturbing, a current employee swears they once saw a ghostly apparition! One day after we were closed, our staffperson was standing on the first floor when movement on the second floor caught her eye. It was a woman in a long, black dress. As the employee turned to watch—immediately thinking, “Oh no, a visitor is still in the building!”—the mysterious person disappeared behind a column, never to reappear. While we’re not sure who such a woman would be, you can bet we’re all a little extra leery when it comes time for lights out.

Are these stories true or just fictions inspired by historic and atmospheric spaces?