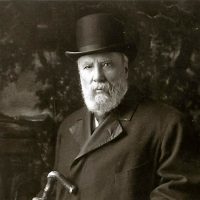 St. Paul was a frontier village by the Mississippi River in 1856, with a population of around 10,000. Minnesota was still two years away from statehood, and only two houses had been built on Summit Avenue, where James J. Hill would later build his own mansion (ironically, Hill would later purchase these first two homes and demolish them to build his Summit Avenue mansion). St. Paul’s status as the northern most navigable point on the Mississippi River made it an ideal jumping off point for people wanting to be involved in the shipping industry.

What was life like for immigrants coming to St. Paul at that time?

Life would’ve been difficult for immigrants coming to St. Paul; it was a rough town, with the arm of the law quite short, but the promise of a new beginning and more opportunities for advancement were enticing.

How was James J. Hill similar or different from other immigrants at that time?

Hill had a private school education until the age of 14, so he was likely better educated than many of the immigrants coming to St. Paul at the time. His ability to both do manual labor and write in a fair hand, figure accurately and network with the right people was an integral part of getting his first job in St. Paul. But I think all of the immigrants coming were all looking to chase the American Dream.

What was Mr. Hill’s first job in St. Paul?

Hill’s first job in St. Paul was as a “mud clerk,” which was the term for an entry-level shipping clerk who would stand in the mud at the edge of the Mississippi River and document the goods being loaded and unloaded.

What kind of business person was Mr. Hill?

I think that Hill had a public persona that was very different than his private one. In business, he was exacting, detail-oriented, hardworking, and no-nonsense. He was known for being difficult to work with because he held his employees to the same high standards that he held himself. But he also wasn’t the kind of leader or business owner who stayed in his “ivory tower”; he was very actively out on the front lines of his business.  And I also think he was rewarded with a great deal of loyalty from his staff, and with a great deal of trust from his business partners.

What can entrepreneurs today learn from James J. Hill’s story?

I think Hill’s story is about being in the right place at the right time with the right combination of skills, knowledge and ambition to succeed. Hard work does not always equate success—think of the thousands of other immigrants who worked just as hard and didn’t become millionaires.

What is the most interesting thing about James J. Hill that most people don’t already know?

That when he was home with his kids, he was “Papa.” We have very sweet letters between him and his daughter Rachel where he says, “How does it come that you have not written to your poor old papa. I hope you have not forgotten me.” As opposed to a letter he wrote to the manufacturer providing the refrigerator for his home that, “if your work does not do what you have undertaken it shall do, I will tear it out.” Again, there’s that dichotomy of the public versus private persona.

Jessica Sutherland is the Program Supervisor of the James J. Hill House. She has worked for the Minnesota Historical Society (MNHS) for 7 years.  For the past three years she has enjoyed supporting her staff in fulfilling MNHS’s mission of transforming lives using the power of history at the Hill House.