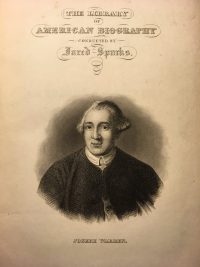 Among the many interesting items one finds when combing the shelves of the James J. Hill Center’s library collection are several dozen book sets. Included are biographies; histories of places and events; personal papers of presidents, diplomats, explorers and businessmen; and government records. Publication dates reach as far back as the early 1800s (some before the birth of Mr. Hill himself).

The oldest? Sparks’s American Biography, a ten volume set originally published in 1834. It set out to include, according to its editor, “all persons, who have been distinguished in America, from the date of its first discovery to the present time,” with the hope that it “would embrace a perfect history of our country.” Though the more familiar faces of this early period of American history are absent, it sheds light on others who were believed important at the time. Beginning with John Stark, an American officer in the Revolutionary War, it tells of other early war heroes as well as physicians, inventors, engineers, and even a little-known signer of the Declaration of Independence. These individuals represent some of the most notable figures of the 18th and early 19th century, many whose lives began nearly three hundred years ago or more, and, perhaps, were those whom Mr. Hill might have admired or even emulated.