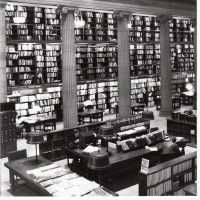 It’s Tough to Stump a Librarian

The Hill Center has a rich archival history of our early years, including original book receipts from 1918, annual reports beginning in 1917, and even reference correspondence from as early as 1921.

The reference correspondence, which includes written requests for information and specific books, demonstrates both what people were researching here ninety years ago and what truly remarkable information finders librarians are!

One of the most fun discoveries was the numerous requests for the identity of a poem—usually with the patron providing only little or incorrect information.

In 1930, someone wrote in to the Hill asking, “Would you be kind enough to advise from what the following quotation was taken. ‘None knew him but to honor him; / None named him but to praise.’” Our diligent librarians discovered this to be the beginning of “On the Death of Joseph Rodman Drake, September 1820,” a poem by Fitz Green Halleck.

How did they do it? While we can never say for sure since the processes for particular reference questions weren’t written down, we can assume it was how most research was done those days: mainly a matter of immense knowledge and familiarity with the subject and the library catalog. It’s possible we had a librarian who specialized in literature or, if not, outsourced the question to an outside librarian or expert.

The editor of “The Daily Argus-Leader” in Sioux Falls, SD, was a particularly curious man. He once quipped in a letter to the Hill that, “I begin to feel there ought to be fees charged for my inquiries.” He often needed help identifying poems. In 1929, he wrote in:

Have you anything in your anthologies whereby you could give authorship and “location” of old poem about the goat that used a shirt off the clothes line to flag a train?

There was a goat—a one-eyed goat—

And he was old enough to vote etc.

Our librarians performed beautifully, promptly sending off the following response:

The version which I found of the poem of a goat that flagged a train reads as follows:

A Harlem goat was feeling fine,
Ate nine red shirts off Sallie’s line
Sal grabbed a stick, gave the goat a whack
And tied him to the railroad track.
A fast express was drawing nigh,
The Harlem goat was doomed to die
But with an awful shriek of pain
The Harlem goat coughed up those shirts and flagged the train.

(Our research department today enjoyed learning more about Harlem goats here and here, even though the latter features a different version of the poem.)

But even the Hill librarians got stumped time to time. Our prolific friend in Sioux Falls wrote in, in 1928:

“An inquiry comes to this office about a poem the burden of which is the following. There is a steep hill and a road runs down the land below. There is a number of accidents happening there and an ambulance is stationed at the foot of the hill to gather up the wounded. Some one [sic] suggests that a railing be placed on the side of the road going down hill [sic], but some one [sic] also says it is not necessary since there is an ambulance at the foot to receiving the injured. Did you ever hear about this?”

Unfortunately, our librarians had not heard about this, even after scouring our poetry anthologies.

Today it’s (usually!) easy to identify a poem or song from misremembered lines by typing them into Google, but for topics such as private company information, consumer behavior, and five-year industry forecasts, it’s still best to consult the experts. For your tough business questions, come in to check out our free specialized business databases, or connect one-on-one with a business research specialist through a Hill membership or premium research services.