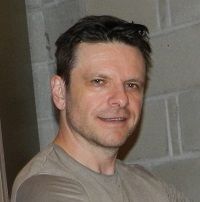 Leah Kodner, Library Specialist from the James J. Hill Center, interviews entrepreneurs and 1 Million Cup presenter  Rich Kronfeld . As seen in the Pioneer Press, Startup Showcase on January 28th, 2017.
According to a 2016 study by the Outdoor Foundation, biking is the fourth most popular outdoor activity among adults, with 12.3 percent of American adults classifying themselves as regular bike riders. Some 26 million American adults ride bikes every year, for a number of different purposes.

Bikers ride for fun, both on city streets and on trails. And many bikers also use their bikes to commute to work. Of course, this is only feasible for bikers who live near enough to their workplaces, and for those who have access to relatively safe streets to bike on.
Rich Kronfeld started Kronfeld Motors in a desire to make biking faster and safer for these commuters. The result is a bike that, when pedaled, can move as fast as a car, while also including important safety features.

Q. What led to this point?

A. I have been an entrepreneur and bike lover all my life. I sold tickets to watch movies in my parents’ garage as a kid, wrote and sold screenplays in Hollywood, appeared in the Paramount film “Trekkies” and produced and starred in a series I co-created and shot in Minnesota called “Lets Bowl” on Comedy Central. I’m also an Emmy Award-winning producer of the children’s series, “The Choo Choo Bob Show” on the Qubo/ION networks, which is also shot in Minnesota. I even entered and won a demolition derby in Anoka. I have volunteered for many organizations and currently serve on the board of Nechama Jewish Disaster Response. Now I have started an alternative-vehicle company, and my background in the entertainment industry taught me the importance of showmanship and new ideas. All my life, I have wanted to do something innovative and unique, and I intend to accomplish this with Kronfeld Motors.

Q. What is your business?

A. My company is Kronfeld Motors, formerly Rahtmobile. It’s the manufacturer of the world’s only highway-speed cycling vehicle. My industries are manufacturing and engineering. READ FULL ARTICLE…

You can hear from startups like this one each Wednesday, 9-10 a.m. at the James J. Hill Center during 1 Million Cups St. Paul. The James J. Hill Center is a nonprofit in downtown St. Paul that provides access to business research, educational programming and a place to work. The Hill is open to the public 10 a.m.-5 p.m. Monday-Thursday. To keep updated on what startup is presenting next or to apply to present, visit jjhill.org/1-million cups