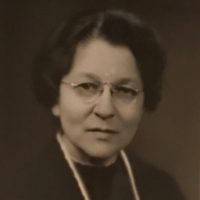 The Hill All Starr

When then-head librarian Joseph Pyle hired “Miss Helen K. Starr, of the Library of Congress” as head cataloger in 1918, he probably didn’t suspect he was hiring the woman who would see the Hill Reference Library through its arguably most significant era.

Pyle recognized Starr’s skills: “Miss Starr has had unusually valuable experience and comes with the highest recommendations from those familiar with her work.” But we don’t need to take his word for it.

As the first Hill cataloger, Starr had the immense duty of creating a cataloging system out of nothing. Fortunately, her experience as a head cataloger at the prestigious Library of Congress meant she was up to the task.

When Pyle passed away in 1930, Starr was the clear successor as head librarian, and she stayed in that role (while still continuing as head cataloger) until her retirement in 1948. Not only was she the longest-running head librarian here at the Hill, but she also saw the library through the challenges of the Great Depression and World War II—and seized the opportunities presented by these hardships, resulting in our highest visitation ever in 1941.

Starr responded directly to the needs of community. When the St. Paul Central Public Library began reducing hours during the Depression, Starr chose to expand our collection to provide ample reading material for students. She also increased the Hill’s open hours and purchased new furniture, creating a “40 percent increase in the seating capacity” (only to be followed by more such purchases throughout her tenure). In addition to filling the gap for the public library’s regular visitors, Starr also remarked that “many young men prepared for Civil Service examinations while others studied in the Library in connection with WPA projects.”

These changes were appreciated: “Many unemployed men have had their courage renewed, their outlook broadened and their understanding of complex economic phenomena clarified by constant reading and study at the Library.”

In 1935, Starr had air conditioning installed, a system which used artesian well water circulated throughout the building (much more affordable than mechanical cooling), meriting a praiseful article in Heating, Piping and Air Conditioning.

During the Second World War, Starr faced new challenges. While admittedly there was “no expectation of air raids” here in St. Paul, Starr saw it as her duty to take precautions. An air raid shelter was created in the ground level, and blackout curtains hung through the library. European periodicals were becoming difficult to maintain, specifically—and not surprisingly—the highly-regarded German chemistry journals.

During the war, libraries nationwide, and at the Hill, suffered large drops in attendance, at least partially because many people were being drawn to service and the armed forces. However, Starr did notice an increase in scientists and engineers from local war plants coming in to use our resources. The Hill continued its role of being a place for people to come, learn, and apply their knowledge to improve the community.

Join us at the Hill to hear from other trailblazing female leaders.  Our program Taking the Lead is a series of free discussions exploring the complex and rewarding ecosystem of women entrepreneurs. Compelling topics moderated by some of the Twin Cities most recognized leaders and joined by diverse panels of professionals sharing their insights, perspectives and experiences. The next discussion will be on April 20th with moderator Jamie Millard, Executive Director of Pollen, as she and her panel discuss Women: The New Rules.